Beyond his treatment of common children's motifs - dolls, toys and ambivalent nymphets- Austrian painter Gottfried Helnwein's vision is shrouded in an aura of enigmatic darkness. With his giant color portraits of stillborn babies; paintings that juxtapose Nazi-era photographs with his own images; and pictures of deformed, abjectly countenanced children swathed in bandages, Helnwein is preoccupied with the indelible suffering that mirrors the more delicate aspects of youth. His work is hauntingly gorgeous and suffused with pathos, precisely because viewers are immediately aware of the larger threat that looms within the pieces: the rupture of innocence. 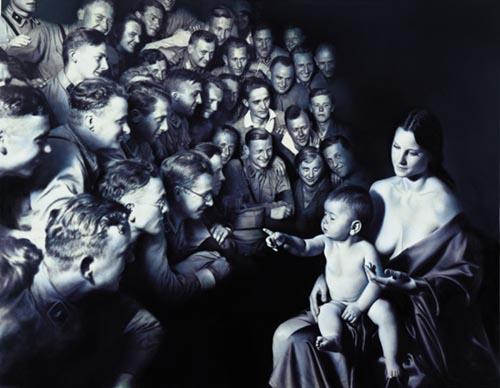 Helnwein's body of work entitled The Child is currently on exhibition at the Legion of Honor. Consisting of 29 paintings, 13 drawings/watercolors, and 20 photographs created over a 35-year period, his oeuvre emphasizes the psychic and physical wounds inflicted upon the blameless. With subtexts like war and sexual exploitation, Helnwein has produced an eerie parable of innocence lost.

Helnwein is accustomed to violent reactions against his work. In 1988, for the 50th anniversary of Kristallnacht, the beginning of the Jewish Holocaust, Helnwein financed his own exhibition to remind people of the era's horrors. Featuring a large-scale series of children's portraits spanning the various ethnicities in Germany at the time of the Third Reich, Helnwein called his work Selektion, to emphasize the Nazi practice of selecting "subhuman" peoples for extermination. While invectives have been hurled at Helnwein for his "exploitation" of children's images for moribund purposes, Selektion is a persuasive reminder of innocence and the price exacted upon it when people choose to discount the grave reality of suffering and cruelty.

The Child illustrates a continuance in Helnwein's themes, especially with his large, monochromatic "Epiphany" series. In "Epiphany I: Adoration of the Magi" (1996), a group of SS soldiers gazes adoringly upon a placid looking woman who holds a naked baby on her lap. Part redemptive and part ironic, it's a farcical send-up of the original Nativity tradition. Helnwein used an archived photo in which the person originally in the place of the child was Hitler. While the painting is disconnected from a discrete narrative and one wouldn't necessarily know, upon observation, that the sinister men in the piece are SS soldiers, Helnwein's work is rendered with oppressive reverence that is immediately apparent. According to Helnwein, "There are many connections between the Third Reich and the Christian churches in Austria and German"; the moral complicity of trusted institutions is the source of his brilliant, black satire.

While his exhibition primarily portrays children, Helnwein is deeply invested in the fantasy world of the child, which evokes both awe and repulsion. In "Midnight Mickey" (2001), a static representation of a popular cartoon character exposes the violence inherent in animated icons while eliminating the possibility of a humorous punch line. Blown up to tremendous scale and realized in a somber gray palette, "Midnight Mickey" is physically distorted, his customarily jovial grin contorted into a menacing leer that induces frightful musings of things that go bump in the night.

Earlier works by Helnwein, like "Sunday's Child" (1972) are dark comic tour de forces- absurdist fantasies coated with hyper-realism and vitriolic commentary. "Sunday's Child" features a knapsack-toting duck slavering over a popsicle, and an adolescent girl in winter garb standing outside a shop window covered with advertisements and other symbols of mass consumerism. The expression on her face is unreadable- her tongue protrudes in what could either be a lascivious gesture or an indication of simple pleasure. In fact, the work is confounded by indeterminacy: we see rivulets of blood running down the girl's legs, but we don't know if she's a victim of sexual violence or early menstruation.

Helnwein's later work is more gentle, more concerned with the specificity of his subject. "Child of Light II" (1972) is a photo documentation in which a gossamer light radiates from the head and hands of a young girl covered in bandages and tubes around her face. It is an image that suggests both beauty and death, in which the child is heroized by her self-radiating stigmata.

"Head of a Child V" (1998) is engulfed in the same quiet drama that accompanies Helnwein's later photographic paintings. Detailed down to the very pores of the young girl's skin, the foreground of her face is flushed with a saintly glow. Her eyes are closed, but her brows are furrowed, bestowing her with a contemplative mien that is both severe and peaceful.

Helnwein's "Angel Sleeping" series (1999) offers several colossal images of what appear to be either stillborn babies or fetuses. Ranging from deformed and leprous to ethereal and slumberous, Helnwein's images transcend their grotesque implications and are bathed in amniotic tranquility and compassionate reverence. Helnwein no longer seems to be invested in overt political analysis, but in the subtle rhythms of human experience.
Helnwein has always said that he paints children because they symbolize humanity better than adults. This may be so, but perhaps Helnwein's images are so profoundly disturbing because of the disparity between the portrayal of children- in all their idealized purity- and the portrayal of suffering. His work is a mesmerizing commentary not only on the exploitation of children in our culture, but also on emotional vacancy and moral torpor, which too often implicate us in the pain of others. By consciously mingling his themes of purity and culpability, Helnwein has presented viewers with a disorienting yet provocative way of apprehending both history and suffering. 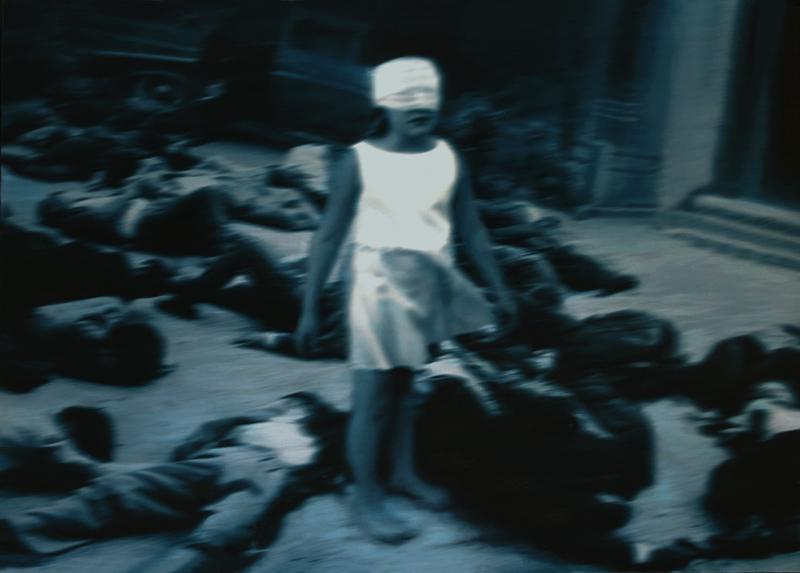